How many of you have looked at the stunning graphics of some of the latest first-person shooters and wondered “hey, if games can look that good, why don’t they use this technology in other types of games too?”

Well, it looks like Zuxxez / Reality Pump had the same idea in mind when developing their latest real-time strategy game, EARTH 2160. To set the record straight, Earth 2160 is the official sequel of the fairly popular Earth 2140 and Earth 2150 series.

With its massive tech tree, rich story line, customizable armies and awesome 3D eye candy, Earth 2160 looks set to be one of the year’s best RTS titles. Could it be that the new King of Real Time Strategy is finally arriving?
Well, let’s start from the beginning. Earth 2160′s plot starts off after where Earth 2150 left us: only a few thousand humans managed to escape from the Earth before its collapse in 2150 A.D. They then spent the next few years building up their civilization on Mars and conquering new planets (therefore, the game is no long based on planet Earth…).

Each of the three human factions “Eurasian Dynasty”, “United Civilised States” and “Lunar Corporation” did this independently and separately from each other, resulting in them having different basic technologies and abilities.

The fourth and last group is, as you may have already guessed, the Aliens who are seeking to take revenge on all of the non-Martian inhabitants occupying their planet. Needless to say that it is up to the player to take control of a faction and to become the sole ruler of Mars, if possible.

At first, the basic gameplay may seem to be the same as most real time strategy titles: collect the 3 main material types (water, metal and silicon), build the biggest army possible and send them off to the enemy’s camp. However each faction has technological differences which add a twist to the game by providing very different game styles.

For instance, the Lunar Corporation’s buildings are built one on top of the other, similar to a skyscraper, whereas the Eurasian Dynasty’s base is a large building comprising of smaller variable parts. In other words, you will have to plan your defence and attack strategies accordingly. 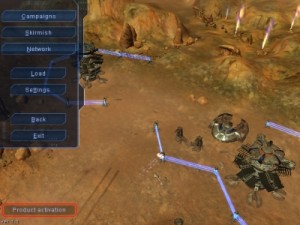 Regarding unit types, they are virtually unlimited as units are customisable. Each unit can be created by a mix and match of various modular parts such as chassis, armour, engine, boosters, cannons and shields. All this certainly adds a much appreciated variety to the battles. Best of all, designs can be saved and used both in the single player mode and online.

There are also a dozen hero characters, called virtual agents, with special abilities (help with research, unit commands, increasing mining efficiency, spying out enemies, stealing technology, etc.) that can be hired. Hiring agents is done during an auction where different players can make their bids for the desired agent. This opens the door to multiple opportunities, such as the ability to economically defeat an opponent by raising the price of the agent he strongly wants to hire. 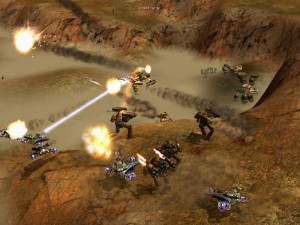 In terms of visuals, Earth 2160 deserves praising all the way. As surprising as it may seem, the impressive cut scenes are actually displayed by the game engine and rendered in real time. It is obvious that the developers tried very hard to create an RTS game that can compete with the latest first-person shooters in terms of eye candy – needless to say that this game will certainly push your hardware to the limit. Magnificent water effects, great looking explosions and gunfire, top-notch zoom modes, and detailed environments make this game a real joy to look at. In fact, per-pixel shading has been so extensively used in the game that the windows of your buildings will dynamically reflect the sky and you can even view the passing clouds roll over the beautiful landscape. 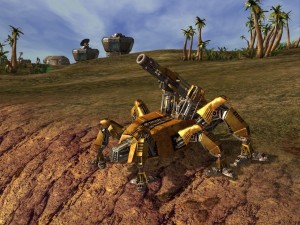 The downside is that depending on your hardware, you may have to lower the graphics settings in order to have an acceptable framerate. That said, even with the lowest graphics details, the game looks astonishing with very detailed and sharp textures and great lighting effects. It is impressive to see the level of detail the developers managed to squeeze into the game even on low end systems. 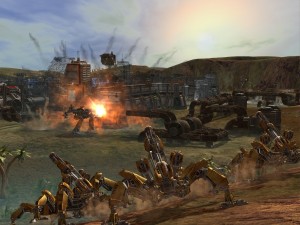 If you have a high end system, get ready for a visual treat as the game supports the latest graphic technologies (such as Shader Model 3.0), so if you own such a card (Geforce 6 or higher) or are planning to get a next-generation hardware (such as XGI’s upcoming Volari 8600), the game will look even more spectacular, making the whole thing almost look like a “playable technological demo”. 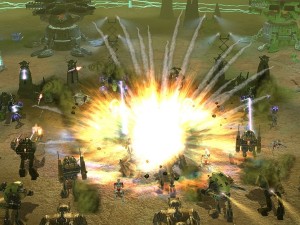 The sound effects are very good and the soundtrack is catchy and truly immerse you into the action of the game. The control system is very simple to use thanks to the use of simple keyboard combinations.

To sum up, Earth 2160 is shaping up to be an excellent real-time strategy game that any RTS fan should definitely look at. It is already distributed in Germany by Zuxxez Entertainment and getting rave reviews from both Germany’s online and paper press.

It certainly looks like the new King of Real Time Strategy has arrived.